The creation of a Cryowar character

The creation of a Cryowar character is a multi-step process involving different techniques and approaches – from a design doc and concept art, all the way to a static mesh and finally, a fully animated controllable character.

First, taking into account the in-game viewing angle, size, and even the hero’s abilities, we form the rough base shapes and silhouettes. It’s important for a character to stand out in the field of battle, as well as having distinct movements and animations. These not only help our heroes in terms of personality but also have an important gameplay purpose.

Then, we start iterating the base shape and tweaking the character’s silhouette to resemble the concept art as close as possible. When the two start looking close enough, we begin to refine and implement the rest of the features into a finished high-density mesh.

In this process, whenever possible, the artists keep all shapes into separate meshes with their own geometry. This way every separate geometry can be assigned its own color mask while being baked over the low-density mesh UVs. This is also a great way to assign different materials while texturing.

From HP to LP

With Cryowar, we needed characters with several different skins and versions, while minimizing the work required to create all of them. That meant some clever reusing of the sculpted geometry and only redoing unique parts for the skins. Given that the viewing angle of the camera is from an elevated 3rd person perspective, we made the elements that are most visible noticeably different between character versions. So the heads and shoulders were the parts we made several variations of, both in the high-density mesh as well as in the geometry of the real-time mesh. By mixing between those duplicated features, a third unique skin was created to fit the lore of the game. 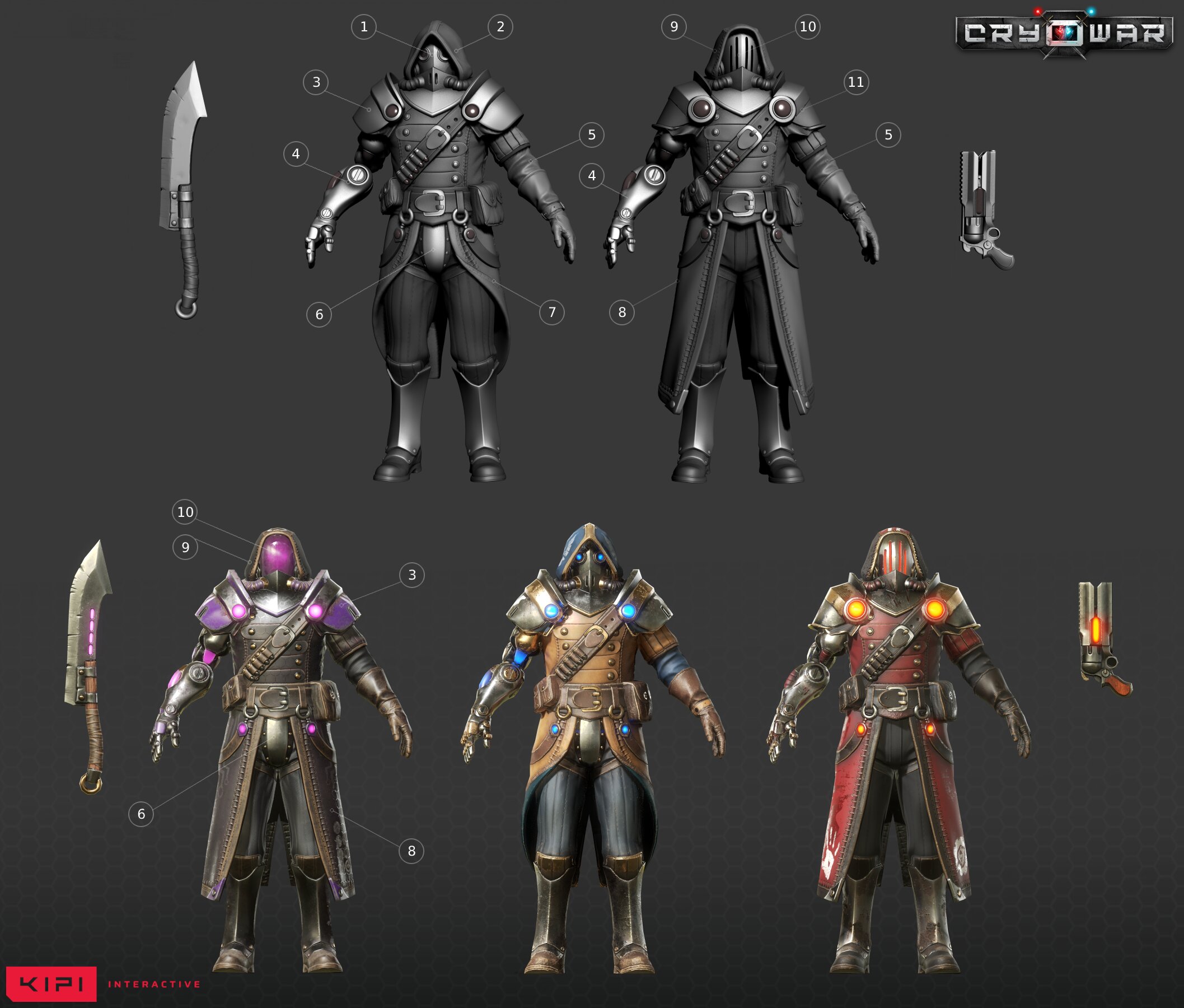 Having baked the high poly detail onto the UV mapped low poly real-time mesh, we now get to the texturing stage where the factions of the game are being fleshed out. Using distinct color schemes and symbols, the Kipi artists assign each faction its own look and feel.

We chose to sacrifice the opacity functionality in favor of emissive glow which led to the character being more visible for the player, while also underlining its faction allegiance. Whenever we had to make tears in the cloths or holes in the mesh, we simply kept them in the geometry. That is actually helping us render the holes more accurately due to not having the small tears being blurred out of existence by the mipmaps and instead relying on the anisotropic filtering to keep them visible.

We also utilized symmetrical overlapping and visible priority pixel density grading for the mapped geometry in the UVs. The top-down view is dictating that the feet are less important than the top of the mesh, hence the size difference in the UVs. The symmetrically overlapped feet are kept smaller than the torso and head. The torso is also not being modified in the geometry as well as in the UVs to give a more unique look between the skins as well as to allow us to create more skins in the future.

Having all that variety of shapes and colors is a very powerful artistic tool and is keeping the door open for additional skins for our heroes in Cryowar later on. The game is, after all, a multiplayer experience and will require additional content to be developed as time goes on.

At this stage, we have the whole model and texturing finished, the geometry parts mixed and the color schemes finalized. It is now time to make the character class feel and play like it was designed to do.

The size of the overall silhouette is complemented by the weapons and stance of the character. The way it moves and attacks is going to fill up the screen in a way that makes you perceive it as a DPS, Tank or Carry type. So, we make sure the personality we have envisioned for the character is easy to recognize through the way it moves and sounds in the game.

From generic idle movement to characteristic rare remarks and specific small talk and gestures, we flesh out the characters of Cryowar to suit the design doc and hopefully your playstyle too.